E Bailey & Sons Beaminster Ltd is a family run company, formed in 1905 and spans 5 generations of the Bailey family.  The Company has built up a first-class reputation in the building industry, within the local community and surounding areas for over 100 years consistently delivering high-quality projects.  The company's core values are quality, efficiency and reliability.  The Managing Director Michael Bailey joined the family firm in 1970 as a general site worker.  Throughout the years Michael trained in all aspects of the building trade before taking up the position of MD from his father Michael Snr in 1980.  In 2005, after completing a Management Degree at University, Michael's youngest son, John, began working for the firm.   John was taken on as a general site worker, as was his father, and worked his way up the ladder to the position of Site Manager.  Since John joined the Company in 2005 Michael has been sharing his expertise and preparing him to take on the running of the business.  2016 brought the retirement of Michael - which we must say is very well deserved!  John has taken on the day to day running of the Company with his wife, Sarah, and they are both very excited about the future of E Bailey & Sons.

We're proud to say that we've maintained a strong belief in good workmanship and a job well done.  Whatever the size of the undertaking, our whole team are aware of the responsibility they have for excellence, safety and respect for the environment.  E Bailey & Sons believes that our people are our main asset, and we're always trying to create the best possible working environment.

We are proficient in all areas of building including

If you require a service that you do not see listed above please do not hesitate to contact us.

We can arrange and project manage your whole building operation including, producing plans, organising electrical works and arranging plumbing and heating alterations / installations.

Take a look at some of our recent projects! 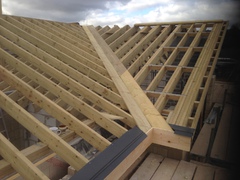